Interested in exploring more about MacArthur and his times? Download one of the MacArthur Memorial’s podcasts! In addition to the basic audio tour of the museum and the World War I History Podcast series, the MacArthur Memorial also produces a monthly podcast on different aspects of the MacArthur story and history from 1865-1964. Topics vary, and if you have a special request, please contact Amanda Williams by email. Click here to subscribe to our podcasts.

Episode Eighty-Six: History vs Hollywood: The Battle of Midway
(January 2020)

History has always been a regular and dependable muse for Hollywood. However, there is always tension between "real" history and "reel" history.  The Battle of Midway is an excellent example of this tension and how Hollywood's take on history is influenced by contemporary events and social issues.  Recently, we sat down with Dr. Tim Orr to discuss the Battle of Midway and how it has been portrayed in major films since 1942.  We also asked if Hollywood was GOOD or BAD for history!  (38:34)

Who was Vicente Lim?  Dr. Richard Meixsel, author of the book Frustrated Ambition: General Vicente Lim and the Philippine Military Experience, 1910–1944, answers this question with a brief exploration of Lim's life and times.  The first Filipino to graduate from West Point, Lim’s military career spanned more than three decades.  Although disappointed when World War I ended before he could get to France with a Filipino Division, Lim would later be instrumental in the development of the Philippine military and he would serve with distinction in World War II.  After the fall of the Philippines and his later release by the Japanese, Lim worked with guerrilla networks to continue to resist the Japanese occupation.  He was captured and later executed in December 1944.  (26:52)

At 2:22 p.m. EST on December 7, 1941, Franklin Roosevelt’s Press Secretary, Stephen Early, announced to the press pool: "The Japanese have attacked Pearl Harbor from the air and all naval and military activities on the island of Oahu, principal American base in the Hawaiian islands."  Within minutes, millions of Americans were informed of the attack.  However, it would take days, months, and years for a more complete picture of the attacks to emerge.  In this episode, Laura Orr of the Hampton Roads Naval Museum, discusses firsthand accounts of several servicemembers who were at Pearl Harbor on the day of the attack. Some of them fought the Japanese, some rescued other servicemembers, and some were killed in the attack (18:14)

Episode Eighty-Three: The Battle of the Wilderness
(October 2019)

The American Civil War was an immediate and formative experience for General MacArthur’s parents and their families.  General MacArthur even referred to himself as the “reunion of blue and gray personified.”  In this special lecture, historian Chris Mackowski tells the story of the Battle of the Wilderness.  (31:30) 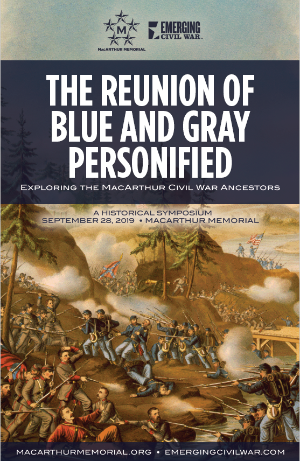 The American Civil War was an immediate and formative experience for General MacArthur’s parents and their families.  General MacArthur even referred to himself as the “reunion of blue and gray personified.”  In this special lecture, historian Dan Welch tells the story of a MacArthur relative, William J. Hardy, who fought with the 1st Richmond Howitzers at the Battle of Gettysburg.  (39:08)

General MacArthur was a voracious reader.  Prior to World War II, he owned thousands of books.  He had to leave this library behind when he escaped to Corregidor during the Japanese conquest of the Philippines.  Sadly, most of the library was destroyed or looted by the end of World War II.  Despite this loss, through gifts and purchases, he was able to amass a second library.  Today, this post-1941 library is housed at the MacArthur Memorial.  It is a fascinating library of over 5000 volumes - with subjects ranging from earthquakes in Japan, to sports, to military history, literature, religion, astronomy, and much more! (11:06) 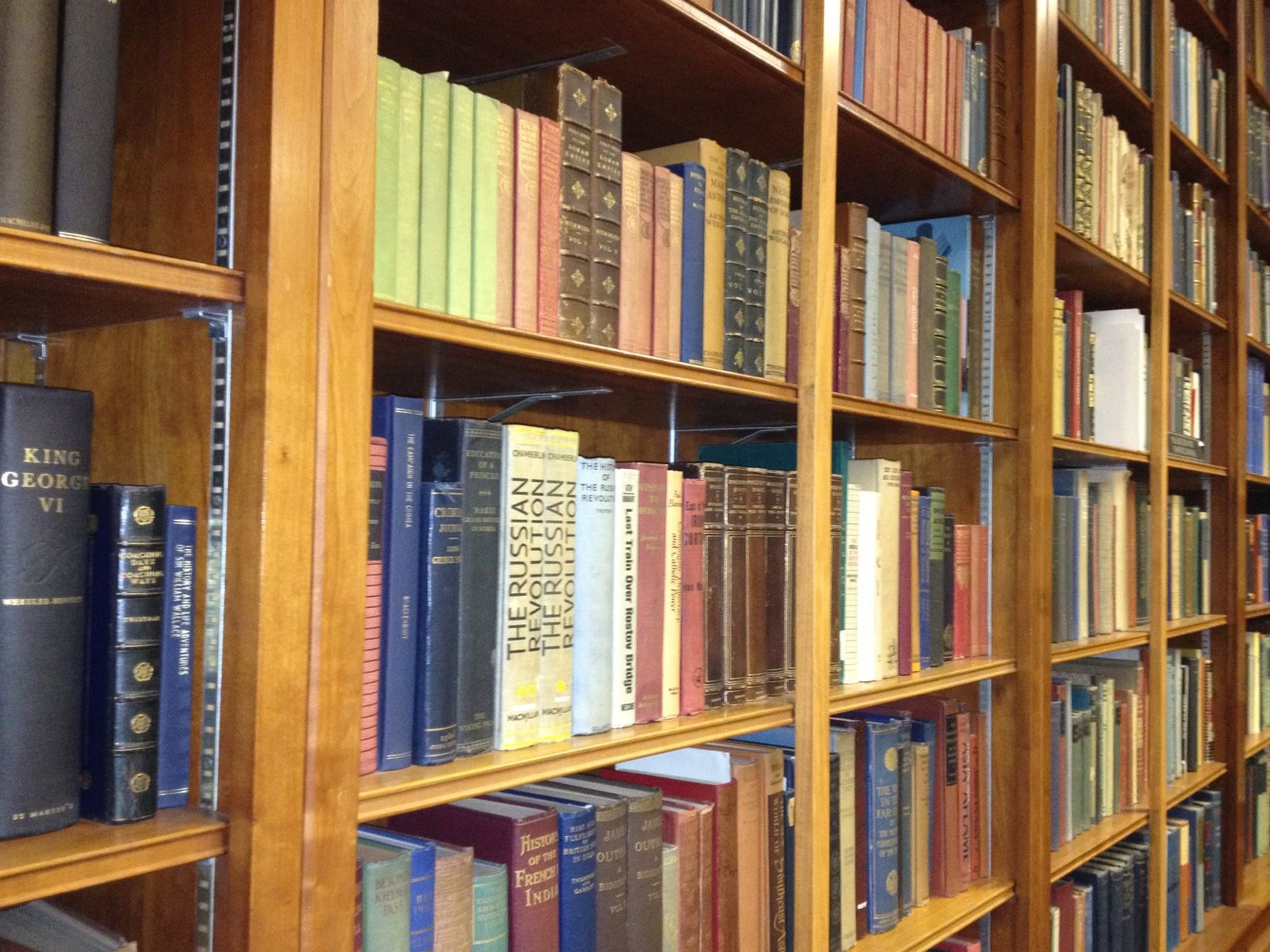 Author Ann Todd discusses her book OSS Operation Black Mail - the story of Elizabeth "Betty" P. McIntosh, who spent eighteen months serving in the Office of Strategic Services in what has been called the "forgotten theater," China-Burma-India.

Betty's craft was black propaganda, and her mission was to demoralize the Japanese through prevarication and deceit, and ultimately, convince them to surrender. On the front lines of psychological warfare, she met and worked with a cast of characters as varied as Julia Child and Ho Chi Minh. She also witnessed an Asia where the colonial world was ending, and chaos awaited.

In 1948, Sibyl Kathigasu became the only Malaysian woman to receive the George Medal for gallantry, the highest civilian honor given by King George VI.  Why did she receive such an honor?  During World War II she actively resisted the Japanese occupation of what was then British Malaya.  As a trained nurse, she provided medical care for members of the guerrilla resistance movement.  She also passed along important information and helped smuggle guerrilla fighters through Japanese held territory.  Captured by the Japanese in 1943, she was repeatedly tortured but never betrayed the other members of the resistance movement.  Her commitment to the Allied cause made her a heroine to the people of Malaya and to the British. (26:33)

In April 2018, the Memorial hosted a talk by Dr. Frank A. Blazich, Curator of Modern Military History at the Smithsonian's National Museum of American History and editor of Colonel David L. Hardee's memoir Bataan Survivor: A POW's Account of Japanese Captivity in World War II.  Dr. Blazich gave a fascinating talk about Col. Hardee's POW experience and the research behind Col. Hardee's story.  (43:57)

The Korean War always generates a lot of questions.  Did MacArthur really want to use nukes?  Did China make use of valuable intelligence from the Cambridge Five?  Where Russian pilots engaging American planes on the Yalu River?  Why was the air war in Korea so restricted?  Or was it?  To discuss these questions, the MacArthur Memorial staff sat down with Dr. Conrad Crane, ‎Chief of Historical Services and Support at the United States Army Heritage and Education Center and author of American Airpower Strategy in Korea, 1950-1953.  (19:04)


Ned Almond is regarded as one of the more controversial American generals of World War II and the Korean War. While most historians agree that Almond was talented and had a distinguished combat record, he also openly espoused the idea that black soldiers were less capable than white soldiers. This overt racism has dominated scholarship of his life, but does not help explain why men like George Marshall, Douglas MacArthur, and Mathew Ridgway saw him as an asset.  To help unpack this complicated story, MacArthur Memorial staff recently discussed Almond’s career with Dr. Michael Lynch, a research historian at the US Army Heritage and Education Center.

Episode Seventy-Five: John Bulkeley and the Escape From Corregidor
(November 2017)

1942 was an eventful year for the United States military. To mark some of the interesting and important events that happened that year, the MacArthur Memorial and the Hampton Roads Naval Museum hosted a 1942" symposium in October 2017. At the symposium, Pete Bulkeley, son of the skipper of PT-41, discussed his father's role in MacArthur's escape from the Philippines. (24:01)