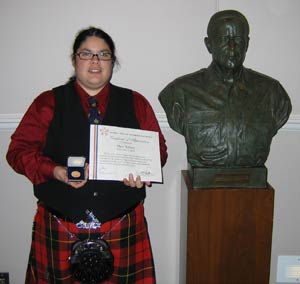 Continuing the partnership between the Tidewater Pipes & Drums and the MacArthur Memorial a special competition was held at the Memorial on April 9, 2005.

During the day more than 30 pipers from seven Mid-Atlantic states were judged on their piping skills. The event’s judges, professional bagpipers David Bailiff of Oxford, Pennsylvania, Chris Hamilton of Frederick, Maryland, and Bob Worrall on Ontario, Canada, performed in a recital that evening. During the evening performance the winners of the band’s General Douglas MacArthur Tune Composition Contest were announced. The tunes were marches with a title that reflects the life and times of General MacArthur.