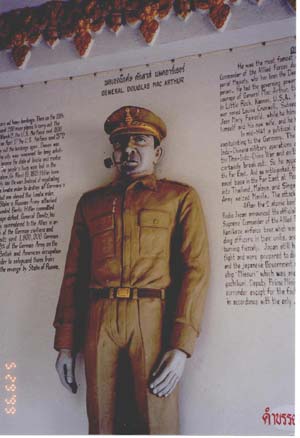 Thanks to a Foundation supporter, Major Bob Seals of Raeford, North Carolina, we have discovered that a statue of General MacArthur adorns the World War II Museum in Kanchanaburi, Thailand. The museum is located on the bank of the Kwai River and is approximately 60 miles northwest of Bangkok. It contains artifacts and photographs that tell the story of World War II, recounts ancient battles between Thailand and Burma, honors important political and military leaders and describes Thai history in general.

The area also contains a number of other attractions connected with World War II. The most famous is the black iron bridge that was built by Allied Prisoners-of-War to link Thailand and Burma during World War II. The bridge, bombed several times in 1945, was rebuilt after the war and is still in use today. The Don-Rak War Cemetery contains the remains of 6,982 Australian, Dutch and British POW’s who lost their lives during the construction of the railway. The Conk-Kai War Cemetery south of the town occupies a former POW camp and hospital. Here lie 1,750 British, Dutch, Malayan and Indian soldiers.

A final attraction is the JEATH War Museum, located inside the Wat Chai Chumphon monastery. This reconstructed POW camp honors the soldiers from Japan, England Australia, Thailand and Holland who served and were imprisoned in the area during World War II. The museum features a long thatched detention hut with living quarters inside made of raised bamboo bunks running the length of the hut.

We will highlight other military museums in future issues of the MacArthur Report. Send us your suggestions.
E-NEWSLETTER
GIFT SHOP
PODCASTS
SCHEDULE TOUR
[]