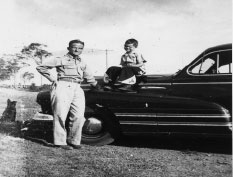 Colonel Gerald Graham, USA (Ret.) during his visit to the MacArthur Memorial, June 1999

When the National Guard had its cavalry taken away, Graham’s unit became the 101st Antiaircraft Unit of the Army of the United States. Immediately after Pearl Harbor, his unit was sent to Australia and was one of the first American units to arrive in that country. Sent to the forward lines in New Guinea, his unit took over the antiaircraft duties during the height of the Japanese push on Port Moresby both before and after the battle of the Coral Sea. His efficiency was noticed by GHQ staff and in early 1943 Graham was asked to manage the headquarters at Port Moresby.

As the war progressed and Advance Echelon Headquarters moved up the coast of New Guinea to Hollandia, Graham moved with it. In the spring of 1944, General MacArthur asked Graham if he would like to become an aide to the General. Graham agreed and was then assigned the General’s most important task, to take care of the General’s wife and son. Graham served through 1944 and 1945 as the personal aide to the General and his family going from Australia to Manila and then to Tokyo.

Having been overseas for four years, Graham chose to leave the General’s "family" in fall of 1945 and returned to the United States where his wife and two year old daughter were waiting. He remained in the Army serving at various posts until 1958 when he then took over as commander of the Culver Military Academy in Culver, IN. He remained there until 1968 when he retired to Georgia with his wife.
In 1999 Colonel Graham visited the MacArthur Memorial and began a friendship that lasted until his death. He provided a three hour oral history packed with stories of his time with the MacArthur’s and life in the South West Pacific Area. He will be sorely missed by all of us.
E-NEWSLETTER
GIFT SHOP
PODCASTS
SCHEDULE TOUR
[]