As in all American Theaters of Operation during World War II, air crews in the Southwest Pacific took great pride in their planes and often named them and adorned them with artworks on the nose of the airplane; more commonly known as nose art.

Every air crew depended on their airplane to get them safely through each mission, and thus grew sentimentally attached to their aircraft. Naming the aircraft and having a symbol of that name painted on the nose of the plane became a right of passage. Bombers, fighters, troop carriers, puddle jumpers; no plane was too big or too small. Humorous, sarcastic, and outrageously risqué, these examples of nose art of the Southwest Pacific Area can all be found in the vault of the MacArthur Memorial Archives.

These images came from the collections of Douglas MacArthur, Thomas Sharpe, and Frederick German. Thomas Sharpe served in the Southwest Pacific with the 79th Airdrome Squadron. Frederick German was the photographic censor for the Southwest Pacific Area Theater of Operations. Please contact the Archivist for any images that were deemed to be too outrageous for publication here. Thanks to Candice Simpson for her diligence in creating this page.

View all nose art photographs in our photo gallery. 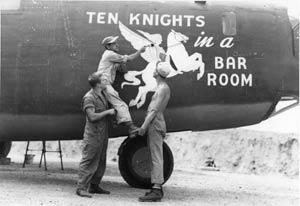