1942 Harley Davidson WLA
Harley-Davidson was the main supplier of motorcycles to the United States military during World War II. More than 88,000 WLA models were produced for the U.S. Armed Forces and its Allies, such as Great Britain, Canada, and Russia. The U.S. Army used vehicles such as this primarily for messengers and military police duties.

This motorcycle is currently on display in the MacArthur Memorial Visitors Center. It was donated to the General Douglas MacArthur Foundation by Bill and Debra Gershen of Rancho Santa Fe, California. 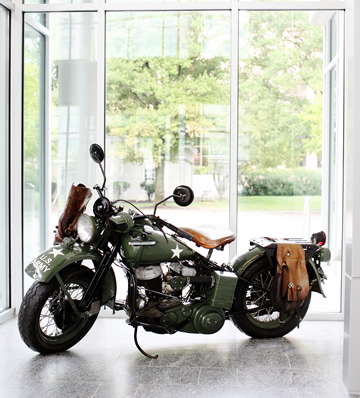