In 1963 the MacArthur Memorial applied for a grant to complete six 7’ x 13’ murals depicting the life and accomplishments of General Douglas MacArthur. The City of Norfolk and the Abbey Mural Trust Fund came together in providing the museum with professional artwork to be displayed in the museum. However, when the National Academy of Design selected Yale graduate Morton Roberts, best known for his paintings of the Russian Revolution and Jazz series published in Life magazine in 1958, to begin the project, they were unaware that he would suffer an untimely death just a year later at the young age of 37.

Because Roberts was only able to complete preliminary sketches of the planned murals, the National Academy of Design considered 10 alternate candidates for the MacArthur murals and finally selected Alton S. Tobey, a classmate of Roberts at Yale. Tobey was well known for his contributions to Life magazine and illustrations for a 12-volume history of the United States published under the Golden Books label.

In less than two years, Tobey created six murals mainly based on photographs of Gen. MacArthur, his family and events in his career. The murals were unveiled at the MacArthur Memorial in an elaborate ceremony January 13, 1966, attended by the General’s wife and son, Jean and Arthur MacArthur. The murals have served as the centerpieces of several of the Memorial’s galleries, although the paintings have undergone some changes in the four decades since their creation. Tour this exhibit and view the paintings in our photo gallery. 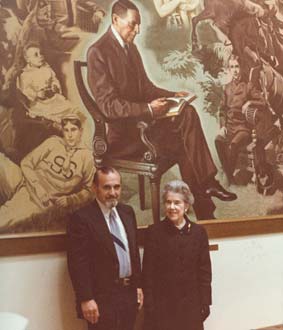 Recreating a Vision
The artist had worked almost exclusively from photographs of his subjects, and also was advised by Major General Courtney Whitney, one of MacArthur’s chief aides, in creating the murals. When creating the “I Have Returned” mural depicting the Leyte landing, it is thought that Tobey was working from a reversed photo, thus the finished mural was a mirror image of most images of the event. While Gen.

Whitney stated that “General MacArthur reenacted this event a few times in order to satisfy tardy photographers – thus the order of the deployment [of the individuals in the image] varied,” the Leyte mural was replaced in 1977 with a second painting of the same name showing Gen. MacArthur and the others arrayed as they are seen in the more common images of the landing. At the same time, subtle changes and additions were made at the request of Mrs. MacArthur to several other murals to make them more historically correct in accordance with facts developed during a more complete study of the depicted events. Tour this exhibit and view the paintings in our photo gallery.
About The Artist
A prolific artist who created more than 500 works of art during a 60-year career, Alton Tobey was born in Connecticut in 1914 and graduated from Yale University’s School of Fine Arts. Tobey’s work was featured in numerous museum exhibits and he completed a variety of murals all across the country. His work was published in Life, Reader’s Digest, American Artist and Spotlight magazines.

In addition, Tobey completed more than 300 paintings for the Golden Book of American History volumes. Subjects of portraits he created include Albert Einstein, Pope John Paul II, Douglas MacArthur and John F. Kennedy. Tobey’s extensive exhibitions were tributes to his exceptional abilities as a multifaceted artist. Alton S. Tobey passed away on January 4, 2005, after a long illness. A website had been created in honor of his 90th birthday just a few months before his death. 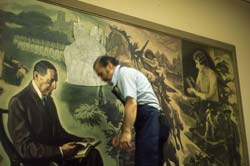