Finding The Crates
Cleaning out one’s attic or garage almost always yields long-forgotten treasures. In fact, that is how many museums receive a lot of their donations. So it was that the MacArthur Memorial recently received a most unexpected donation associated with both the most controversial part of General Douglas MacArthur’s career and also with the establishment of the Memorial itself.

As the face of Norfolk’s downtown continues to change, one of the biggest changes is the development of a light rail transit system which will stop directly in front of the MacArthur Memorial. That site currently is occupied by the city’s Kirn Memorial Library, which will be torn down in early 2009 and the library moved to a new location across the street.

In the process of cleaning out the library in preparation for the move, library staff began to find large wooden crates throughout the building. These crates were stenciled “General Douglas MacArthur”. What were they and what were they doing in the city’s main library?

These crates were stenciled “General Douglas MacArthur”. What were they and what were they doing in the city’s main library? 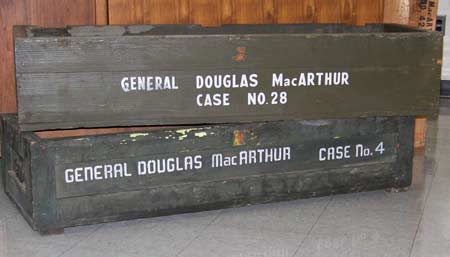 When They Went Missing
Gen. MacArthur signed his agreement with the City of Norfolk to establish the MacArthur Memorial in February 1961 and work began renovating the former City Hall about the same time, which would display the General’s uniforms, medals, pipes, art, family silver, etc. His papers and books were also slated to come to Norfolk as well, to form a research center for historians and academics. However, when the items were shipped from MacArthur’s office in New York City to Norfolk in 1963-4, storage space at the Memorial was limited. So limited in fact, that everything not going on exhibit was stored off-site; the papers were housed temporarily at the new Kirn Memorial Library, which had opened in 1962. The Memorial’s original Archivist had his office for a time at Kirn before what is now the Jean MacArthur Research Center was completed.

Even though the papers made their way to the Memorial, the crates in which they were originally delivered did not. Instead they remained at Kirn for the next 40 years, eventually being all but forgotten.

Moving Crates?
When library staff first contacted the Memorial about the crates they were finding as they prepared for their own move and inquired whether we wanted them, we agreed to take them off their hands, as remarkably we had none in our own collection. As they began to deliver the crates (which measure about 4 ½ feet long x 1 ½ feet wide x 1 foot tall) we began to wonder exactly how old were they? When General MacArthur was recalled from the Far East by President Truman in April 1951 everything the family owned was shipped from their residence at the American Embassy in Tokyo to New York City, where the General and Jean would reside for the rest of their lives. Was it possible that these crates were used in the 1951 move as well as the 1963 move to Norfolk?

Unfortunately the lids to all the crates were missing, so any clues that may have been contained there in the way of shipping labels or other markings were gone. The first several batches of crates which we received from Kirn were a bit of a hodge-podge: some were quite nicely constructed and painted olive drab with handles, others were rough-hewn and unpainted wood with no handles. All were lettered simply “General Douglas MacArthur // Case #”. We have no photographs showing the family belongings being packed up at the embassy, although we do have one showing one of the moving trucks leaving the main gate. So no photographic evidence could show what was used in 1951.

Proving Legitimacy
None of MacArthur’s biographers bothered with such a mundane detail as describing the shipping containers used, although D. Clayton James noted that after learning of his dismissal MacArthur went to his office at the Dai Ichi building “only twice, and then just to oversee the movement of his personal effects to the embassy” (The Years of MacArthur, vol. III, pp. 602-3). And none of the veterans of MacArthur’s Honor Guard whom we contacted had any knowledge of what was used either.

So it was looking like we may be unable to prove that any of these crates were used in 1951. Then the last batch of crates was brought over from Kirn. One of these had Japanese writing inside. More intriguing was another which is very clearly lettered “GHQ AFPAC // APO 500” – General Headquarters, Armed Forces – Pacific, with MacArthur’s Army Post Office number. Clearly this one dated to the Occupation of Japan, possibly even back to the closing months of World War II when MacArthur was appointed AFPAC commander. Still not definitive evidence, but pretty good circumstantial. And for the present it appears there it will remain.

The MacArthur-Truman controversy remains one of the most contentious aspects of 20th century military and political history. And here are a number of ordinary artifacts associated with that episode in history which for decades had been only a few yards away from our facility.