This leather map case belonged to Col. Paul I. “Pappy” Gunn, U.S. Army Air Corps, a pioneer in military aviation in the first half of the twentieth century. The case is marked “PILOTS NAVIGATION KIT / AIR CORPS / UNITED STATES ARMY” in gold on the front and has a green interior with several pockets..

An undated Philippine Air Lines tag – an airline started by Gunn – is attached. It was given to the Memorial, along with a collection of maps, photographs and papers belonging to “Pappy” Gunn, by his daughter Mrs. Julie Gunn Bonnano of Arlington, Virginia.

View more photographs of this exhibit in our photo gallery.


About "Pappy" Gunn
A native of Quitman, Arkansas, “Pappy” Gunn joined the U.S. Navy in 1918, and retired as Chief Petty Officer after 21 years of active duty in December 1939. After his retirement he started Hawaiian Air Lines and Philippine Air Lines, using five privately owned Beechcraft planes. With the entry of the United States into World War II, Gunn was commissioned Captain in the U.S. Army Air Corps. In the early days of the war in the Philippines, Gunn used his two remaining aircraft to shuttle supplies from Mindanao to Luzon.

While Gunn escaped to Australia upon the Japanese conquest of the Philippines, his family remained behind and was subsequently interned by the Japanese at Santo Tomas prison camp in Manila. One of Gunn’s most noted achievements during World War II was arming B-25 Mitchell bombers with numerous .50 caliber machine guns, thus making the aircraft into a deadly strafing weapon – an invention which revolutionized war in the Pacific.

Gunn is said to have flown more missions than any other man during the war. After Japan’s surrender, Gunn set to work rebuilding the Philippine Air Lines. On 11 October 1957, Gunn was killed when his plane crashed in a rainstorm in the Philippines. 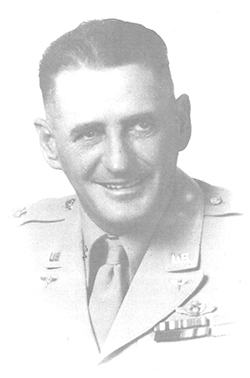