This Cameo model Dictaphone dictation machine was used in Gen. Douglas MacArthur’s Church Street office in New York City. While the MacArthurs lived at the Waldorf-Astoria after the General’s recall from Korea in 1951, he maintained a small office across town with a staff of about three. However, MacArthur seldom used the office personally, as he entertained visitors at his residence in the Waldorf where he also dictated his correspondence, possibly using this machine. This dictation was later transcribed by his staff at the Church Street office.

Other Contributions
This Dictaphone was among several items of furniture recently given to the MacArthur Memorial by the U.S. Army that had been used in the Church Street office. In addition to this machine, four leather chairs, two hat racks and a desk lamp also were given to the Memorial. Some time after MacArthur’s death, the Church Street office was closed and the furniture shipped to Fort Monroe, Hampton, Virginia, where it was used in the General Douglas MacArthur Memorial Office, an office provided for use by visiting dignitaries. It later was shipped to Fort Leavenworth, Kansas, before being delivered to the MacArthur Memorial in early 2006.

A small brass plate has been affixed to the top of the machine by the Army denoting its association with Gen. MacArthur. A similar plaque adorns the other items used in the office. View more images of the Dictaphone in the photo gallery. 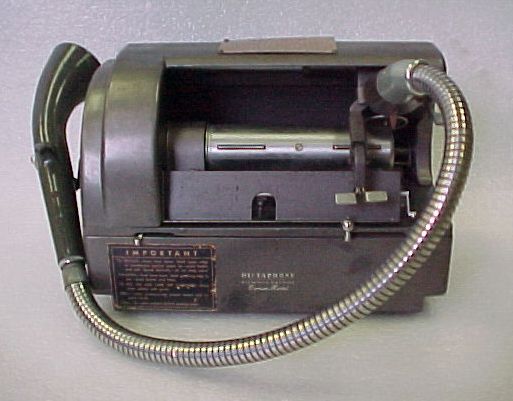