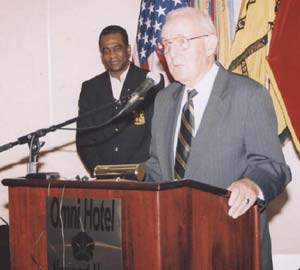 On February 9, 2006, Foundation board member Colonel Lyman Hammond presented the annual MacArthur Awards to the U.S. Army Reserve Officers’ Training Corps at the Commander’s conference. These awards were instituted in 1989 and honor the top U.S. Army ROTC units from the 272 units located around the United States. Those selected were the most successful of the Commands’ units in accomplishing their mission of training and commissioning the majority of the lieutenants entering the Army each year. These units best represent the ideals of the watch words, Duty-Honor-Country and the legacy of leadership as practiced by General Douglas MacArthur.

These awards recognize performance among the small, medium and large battalions in the Eastern and Western regions. The command winners for the Eastern region are Bucknell University, Wake Forest University and Rochester Institute of Technology. For the second straight year Bucknell University was selected as the best overall Eastern Region Command recipient. California State University, Fullerton, Wheaton College and Arizona State University received the awards for the Western region and Wheaton College also was recognized as the region’s best overall winner.
The General Douglas MacArthur Foundation is honored to recognize these future leaders of the United States Army. We are proud of all the units and individuals who make up the Army ROTC program. Since its establishment in 1916, over 500,000 men and women have become United States Army officers through Army ROTC.
E-NEWSLETTER
GIFT SHOP
PODCASTS
SCHEDULE TOUR
[]