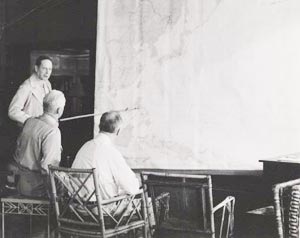 The Pearl Harbor Conference of July 26, 1944, was a milestone in the career of General Douglas MacArthur.  It was there that General MacArthur convinced President Franklin D. Roosevelt that the United States must return and liberate the Philippines for strategic as well as moral reasons.  MacArthur had a brilliant grasp of the power of the persuasive speech.  Unlike his speech that swayed the Joint Chiefs of Staff to proceed with his Inchon plan in 1950, the argument MacArthur used to convince President Roosevelt for an invasion of the Philippines instead of Formosa in 1944 has been lost to posterity.  Up until recently another part of the history of the Pearl Harbor Conference seemed to be lost to history.

In the 40 years of the existence of the MacArthur Memorial, a picture of MacArthur giving his speech at the Pearl Harbor Conference has been sought by dozens if not hundreds of researchers.  There were dozens of photographs of the conference itself, and two very good images of Admiral Nimitz giving his speech at the conference, but we didn’t have a picture of MacArthur making his case for the return to the Philippines.  After an extensive search of all the Library’s books and publications, the only book that contained such a photo was Lee and Henschel’s 1952 publication Douglas MacArthur.  Even though Richard Henschel had donated all his photographs from his years as an Army photographer in the Southwest Pacific to the MacArthur Memorial in the 1970’s, the elusive photo was not in the collection.  As the years went by editors, documentary filmmakers, authors, and publishers requested a photo of MacArthur at the map making his pitch to be able to fulfill his pledge “I Shall Return.”  They were all turned away empty handed.
This past year a package showed up unannounced on the MacArthur Memorial’s doorstep.  It was from Brookline, Massachusetts, and contained a vast collection of MacArthur photographs from World War II.

The letter that came with the collection was from Ms. Robin Henschel.  She had inherited the photographs from her father, Marvin Henschel, the brother of Richard Henschel.

After a few short moments of frantic digging in the pile of photographs, there it was.

Now after 50 years, we publish the photo of General MacArthur highlighting his case for the liberation of the Philippines, once again.
E-NEWSLETTER
GIFT SHOP
PODCASTS
SCHEDULE TOUR
[]