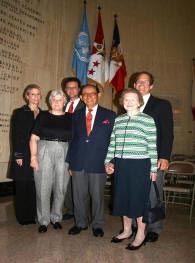 Accompanied by his grandson, Christopher Sembrano, Former Philippine President and General Douglas MacArthur Foundation Honorary Director, Fidel V. Ramos visited the MacArthur Memorial this past summer. During this, his third visit to the Memorial, President Ramos officiated at the dedication of the six replacement flags in the Memorial’s Rotunda.

This long term project will retire over the next three years the 30 flags on display around the walls of the Memorial’s Rotunda and replace them with new flags manufactured by National Capital Flags of Virginia.

Participating in this dedication ceremony were Louise Martin and Sandy Martin and Betty Anthony, with Tyler and Jacque Anthony. Louise and Betty are the widows of our two late directors emeritus Roy B. Martin, Jr. and Barry B. Anthony. Funding to purchase the first six flags was made possible through donations in memory of these Foundation leaders.
E-NEWSLETTER
GIFT SHOP
PODCASTS
SCHEDULE TOUR
[]