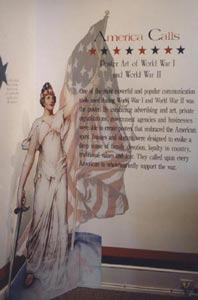 Morale on the home front has always played a key role during times of war. In the times before broadcast media became widespread, one of the easiest ways to reach the populace was through visual art – this included the poster. During World War I and World War II, storefronts, fences, practically anywhere with a window or a wall visible to the public, were used to display posters to muster popular support not only for the fighting men overseas but for support at home. While some of the artists themselves might not be familiar names, the images they produced are very well known. James Montgomery Flagg’s Uncle Sam, Howard Chandler Christy’s popular "Christy Girls," and Norman Rockwell’s scenes of everyday life all were used by the US government and various corporations to appeal to the American spirit during the World Wars.

The MacArthur Memorial’s newest special exhibit America Calls: Poster Art of World War I and World War II highlights the Memorial’s extensive collection of WWI and WWII posters, foreign as well as domestic. This exhibit, which opened October 29, 2005, features 37 posters from the United States as well as England, France, Scotland and Canada. The majority of these posters come from the Paul Keith poster collection of some 400 posters purchased by the General Douglas MacArthur Foundation in 1974, while other examples were given to the Memorial by World War II 1st Cavalry Division veteran Larry Baldus of Milwaukee, Wisconsin, and the Norfolk Public Library’s Larchmont Branch.
Millions of posters were produced by America alone during the World Wars in designs numbering into the thousands. These posters were used not only for recruiting purposes, but also to urge conservation of food as well as natural resources by civilians at home and to impress the need for secrecy regarding military operations.

Production of wartime posters was not limited to governmental bodies; large corporations such as General Motors also produced them to boost morale as well as production in their factories. And some designs could be customized by adding the name of a small local business to a mass produced image.

Because of the sheer numbers of posters produced, large numbers of original posters remain in existence, some fetching high prices with collectors. They were also popular souvenirs for civilians at home as well as troops overseas. 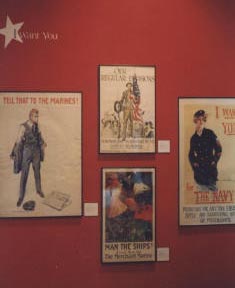 The artists used various means to get their message across; some used comparisons to historical figures while others stopped just short of implying guilt for hoarding badly-needed war supplies. Still others, particularly during World War I, dehumanized the enemy, making him appear a ruthless, almost sub-human barbarian. Dramatic renderings of drowning sailors drove home the importance of secrecy surrounding troop movements. These presented a stark contrast to brightly clad young children clutching war bonds. The Red Cross and other relief associations sought donations not of war materiel but rather books and other small comforts to be sent to the troops. Uncle Sam beckoned to all young men to serve their country in uniform while other artists depicted metal workers to reinforce the need for steel for the fighting machines themselves. But all had the common goal of appealing to the deep-rooted sense of one’s own country and defending it at all costs.

Many of these images remain part of the American conscious today, as do some of the catch phrases they contain, such as "Loose lips sink ships."
And while the concept of Uncle Sam predates World War I, the popular image of Uncle Sam is based most closely on the renderings of him by James Montgomery Flagg and others during that conflict. And going beyond just the messages printed on the posters, the paintings reprinted on them are in and of themselves fine works of art. Norman Rockwell is viewed today as a master of American painting with his works in the Saturday Evening Post being quite popular among art collectors. Howard Chandler Christy, whose famous "Christy Girl" adorned several US Navy recruiting posters, was one of the most popular artists of the early 20th Century and is perhaps most known for his large mural The Signing of the Constitution of the United States which hangs in the U.S. Capitol.

In the electronic age of today with its computers, cell phones and television, these posters may seem obsolete and archaic. But these original posters tell the story not only of America’s participation in the World Wars but also serve as examples of the American spirit.
E-NEWSLETTER
GIFT SHOP
PODCASTS
SCHEDULE TOUR
[]