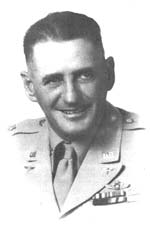 Arkansas native Paul Irvin “Pappy” Gunn joined the U.S. Navy in 1918, retiring as a Chief Petty Officer in 1939. After his retirement he started Hawaiian Air Lines and Philippine Air Lines. With the entry of the United States into World War II, Gunn was commissioned a Captain in the U.S. Army Air Corps. In the early days of the war in the Philippines, Gunn used the two remaining Philippine Air Lines planes to shuttle supplies from Mindanao to Luzon. While Gunn escaped to Australia when the Philippines fell to the Japanese, his family remained behind and was subsequently interned at Santo Tomas prison camp in Manila.

One of Gunn’s most noted achievements with Fifth Air Force was arming B-25 “Mitchell” bombers with numerous .50-caliber machine guns, making the aircraft into a deadly strafing attacker – an invention which revolutionized the air war in the Pacific. He also experimented with installing 75mm cannons in the nose of a B-25 – however, the recoil from the weapon caused considerable handling problems for the pilot. Gunn is said to have flown more missions than any other man during the war. Gunn was killed when his plane crashed during a storm in the Philippines October 11, 1957.

Col. Gunn’s map case is on exhibit in MacArthur’s Airmen.

View photographs of this exhibit in our photo gallery.